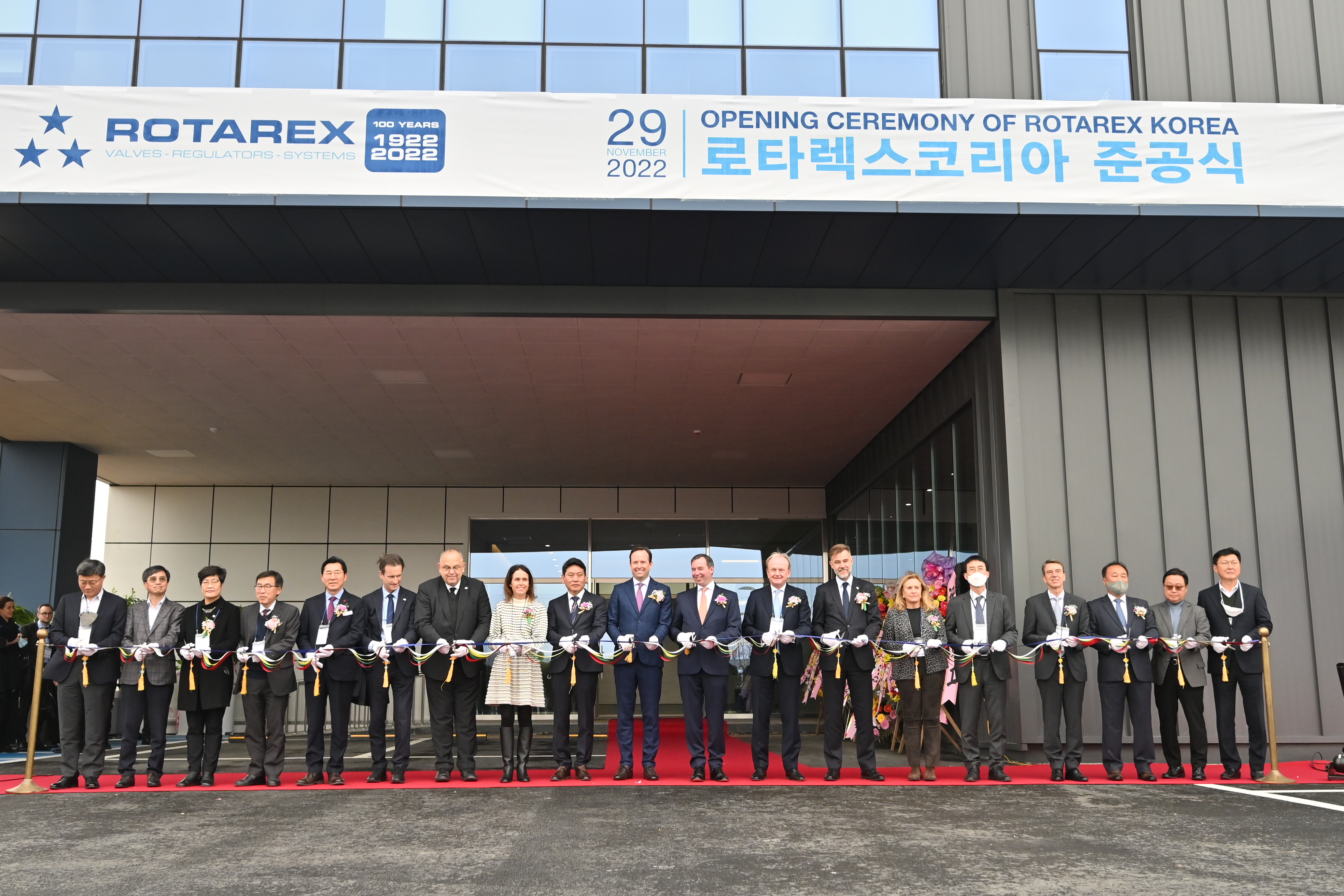 H.R.H. Prince Guillaume the Hereditary Grand Duke of Luxembourg and Franz Fayot, the Minister of the Economy, together with Youngjin Jang, 1st vice-minister of Trade, Industry and Energy of the Republic of South Korea participated in the official inauguration of the new state-of-the-art production site of Rotarex in Asan City, in presence of Rotarex Chairman, Jean-Claude Schmitz, Rotarex Board of Directors and Rotarex Korea General Manager, Bonnam Koo. After the official ribbon cutting, the guests were given a guided tour of the new factory.

The inauguration was organized in the framework of an official economic mission of Luxembourg to South Korea. From November 27 to 29, 2022, H.R.H. Prince Guillaume the Hereditary Grand Duke of Luxembourg and the Luxembourg Minister of the Economy, Franz Fayot were heading a business delegation to South Korea in an effort to strengthen economic and political ties, in the context of the celebrations around the 60 years anniversary of diplomatic relations between Luxembourg and South Korea. The program of the economic mission was marked by the opening ceremony of the new Rotarex site which is the first investment in South Korea of a company owned 100% by private Luxembourg shareholders. 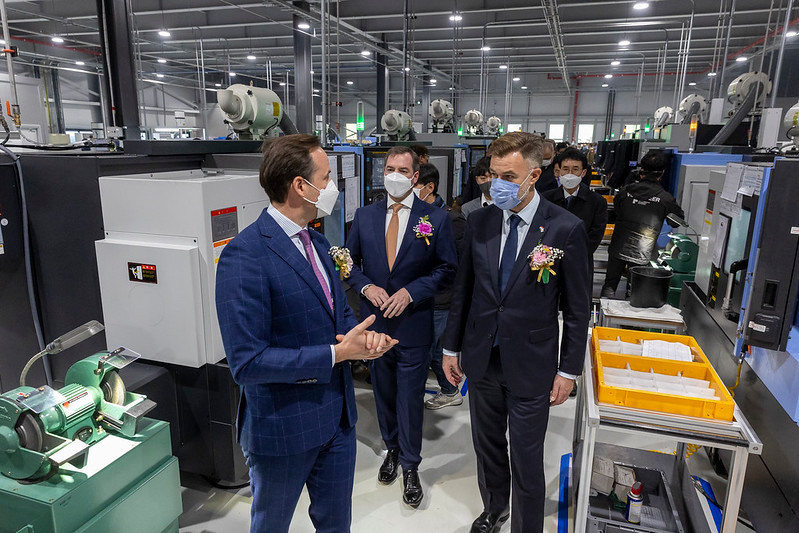 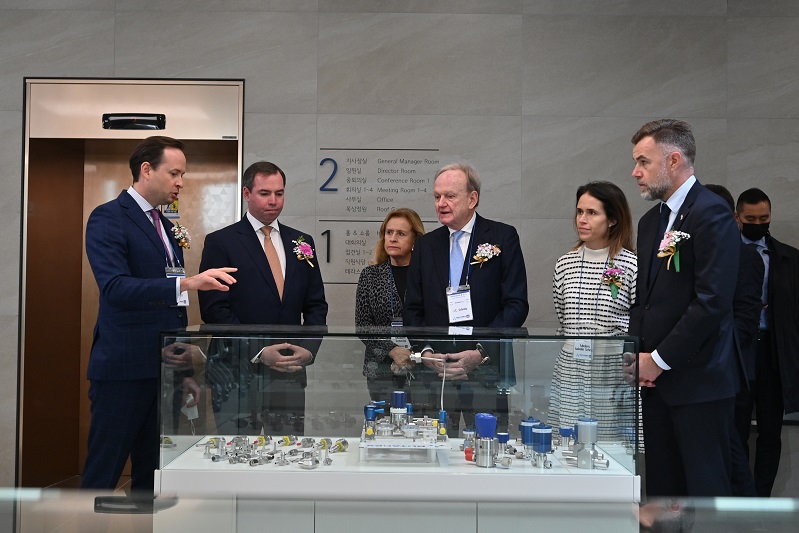 With a total investment of 20 million euros, out of which the province of Chungcheongnam-Do subsidize 1.5 million euros, the new facilities occupy 7.000 square meters and were built in less than one year on a ground of 1,2 hectares. The new construction is eco-friendly thanks to solar panels, covering the roof, with a capacity of 180KW, and the parking equipped with 10 electric charging terminals. Besides sales, product management, research and development, laboratory, machining and assembly, the brand-new site houses a large warehouse that is intended to serve as a distribution hub for all Rotarex products throughout its twelve branches in Asia. To date, 90 people have been hired to reinforce the existing local workforce, and very soon more than 100 persons.

Rotarex has business relations with South Korea since several decades. Early 2021, Rotarex opened business offices in South Korea to strengthen its relationships with customers. One year later, with the success of its products and the hard work of the local teams, Rotarex decided to invest significantly to build a plant to continue to grow and serve its customers even better. The city of Asan, in the province of Chungcheongnam-Do, is ideally located: it is 30 minutes away from Seoul by high-speed train, next to 3 international airports and port facilities and home to fifteen other large companies active, among others, in the automobile, semiconductor and chemical industries.

On 26 October 2022, an official Korean delegation, including the governor of the Chungnam province, Kim Tae Heum, and the mayor of Asan, Park Gyeong Gwi, came to Rotarex Headquarters in Luxembourg to sign a Memorendum Of Understanding (MOU) to seal the partnership with South Korea, the province of Chungnam and the city of Asan.

Franz Fayot, the Minister of the Economy stated: “This new plant underlines the good relations between Luxembourg and South Korea that are built on trust and shared values. In the current times, we need strong and reliable partner countries like South Korea with whom we have much in common, as pioneers of innovation and leaders in the high-tech and digital arenas. I am glad that Rotarex has chosen South Korea to establish its new production site for a key industry in the world economy.”

Bonnam Koo, General Manager of Rotarex Korea added: “I am pleased to open a new production facility in Korea to better support our customers. This new plant will produce innovative, high-tech gas control components and systems that will enable our customers to control ultra-high purity gases safely and efficiently in the simplest way possible.I would like to express my thanks to Mr. Schmitz, who made the right decision to invest, and to all my colleagues, who helped build the plant in a short period of time.”

Founded in 1922 in the Grand Duchy of Luxembourg, Rotarex designs and manufactures the widest range of very high-quality gas control products for delivering peak performance. With over 350 patents in its portfolio, ISO certified manufacturing standards and unmatched source through production quality control, Rotarex products perform better, require less maintenance, and have a longer life. Rotarex group counts 2,000 people, 11 production sites worldwide and 32 sales offices to serve customers all around the world. 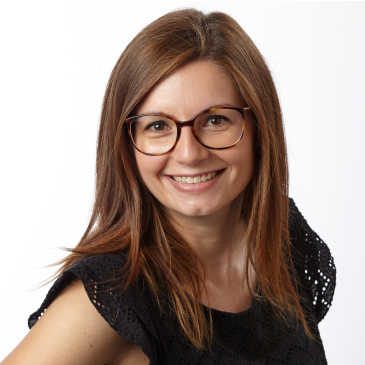 Please note, you may continue to use the website even if you do not accept the use of cookies. However, the visitor experience on subsequent visits will be diminished.